Remembering: Martha by Mail (The Catalog For Living)

In the June 1995 issue of Martha Stewart Living magazine, in her monthly letter to readers, Martha made an announcement:

"During the summer, we will use a small portion of our time on Lifetime to introduce you to some of the products we are producing in response to your requests. We are doing this to help you obtain items you have found interesting and desirable, such as a collection of peony plants or a wonderful cake decorating kit. Initially many of these test products will be in very limited supply, so be sure to order quickly to avoid disappointment. As our business grows and we learn more about the production and merchandising of these items, we will keep you informed. Please let us know the kinds of things you want and need..." 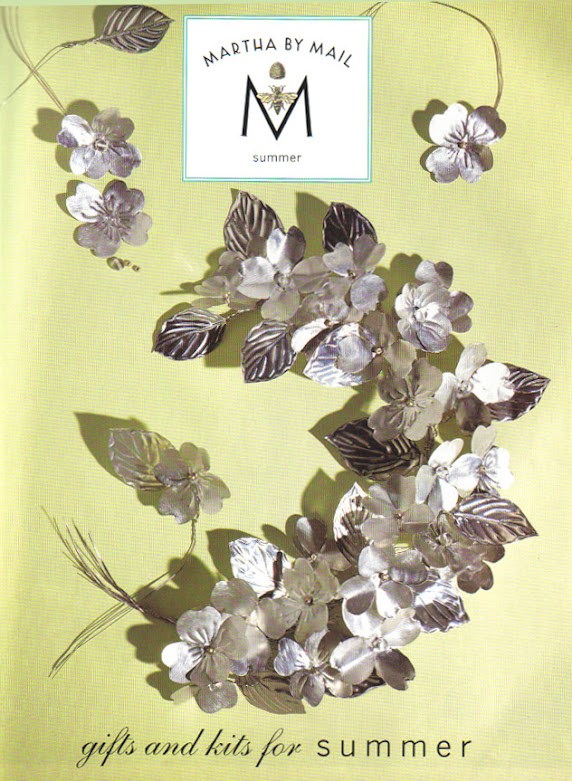 Imagine being able to buy some of the delightful crafts, dishes, vases and storage units shown in the pages of Martha Stewart Living magazine. That was the thinking behind a mail-order catalog business that the company launched to help supply the demand from consumers. Everything from furniture to craft supplies, preserves and confections to gardening clogs, wreaths and cookie-cutters were on offer. The venture started off small. Several issues of the magazine that year were accompanied by mail-order inserts called "Martha By Mail." The demand was so high, however, that Martha soon realized she would have to develop an in-house merchandising team to design and create new products for this special division of the company. When marthastewart.com launched the following year, the Martha by Mail retail component was added to the online fold, which not only facilitated the ordering process, but also widened the market. 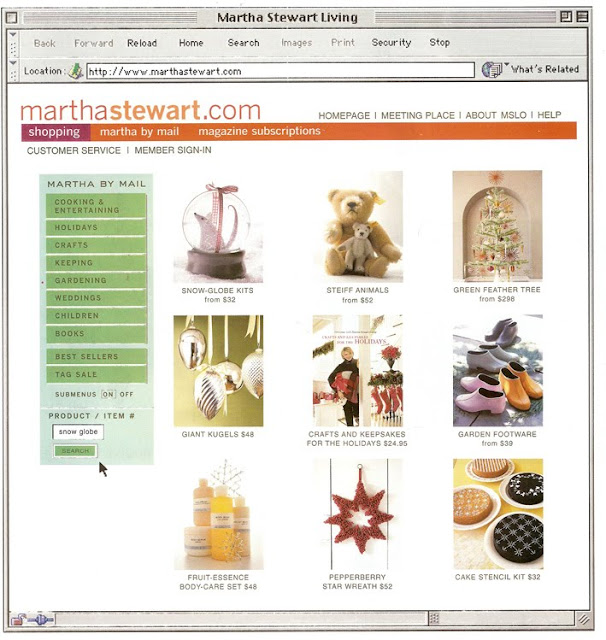 In 1998, "Martha by Mail" was strong enough to become an official catalog business; consumers could subscribe to the catalog and order any number of goods featured on its pages or online at marthabymail.com. What made the catalog so unique was the high quality of the product and the unique designs that were simply not available anywhere else. Many of the pieces were recreations of Martha's original antiques, others were new designs that were filtered through Martha's personal tastes as a guide to their level of quality and appeal. There was an air of exclusivity, rarity and even community in the Martha by Mail venture.

The division was initially headed up by Fritz Karch, a style editor and the senior vice president in charge of product development. (As Martha by Mail expanded, Fritz moved into an editorial position at the magazine. Many of us remember him as the Collecting editor!) Fritz assembled a team of eighteen 'hunters and gatherers' to create, discover and develop new products for the catalog and the online store. 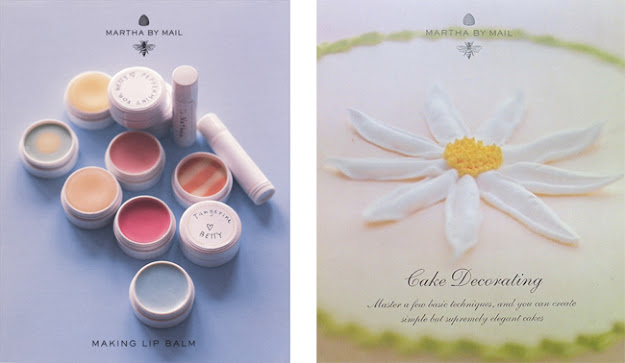 Among the first products to be issued were craft and decorating kits that were designed to make it simpler for readers of Martha Stewart Living magazine to create the projects shown in its pages. Shown above are the beautiful instruction booklets for a lip-balm kit and a cake decorating kit: each came with all the supplies necessary to carry out the projects with confidence.

Martha and her merchandising team partnered with some of the world's leading makers and manufacturers of fine household items from around the world to create the products they designed: L.E. Smith, Mosser, Frankoma, Robinson Ronsbottom, NordicWare, Wilton, Ateco, Lloyd Flanders, Sterling China, Broggi, Chiarugi, Krosnos, Steiff, Wedgwood, Juliska, Janaer Glas, Rainer, Michael Bonne Copperworks, Fenton, Bernhardt Furniture, Eleni's, Niman Ranch and CK Products were just some of the silversmiths, food producers, foundries, glassworks, ceramicists and furniture makers that provided products for the catalog. From England to Germany to Italy to Japan, and all across the United States, Martha by Mail brought together a world of tradition and craftsmanship that was unparalleled in the online-catalog business at the time. 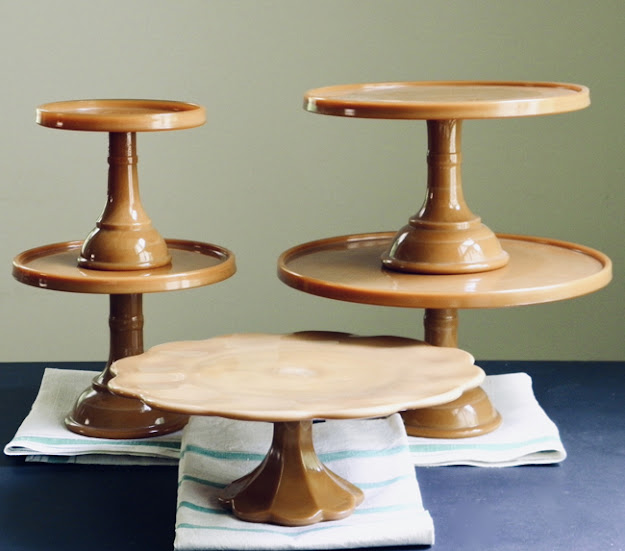 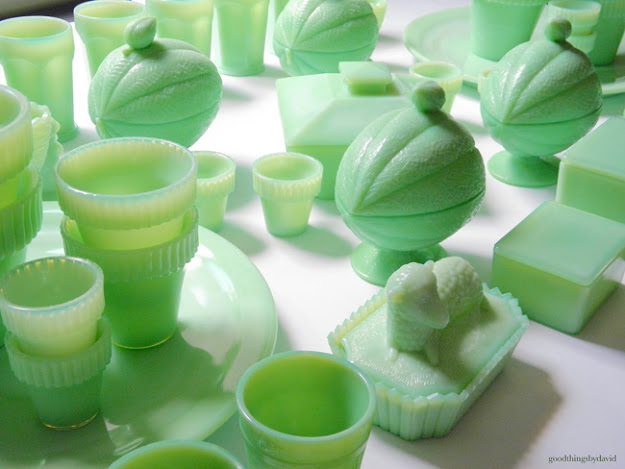 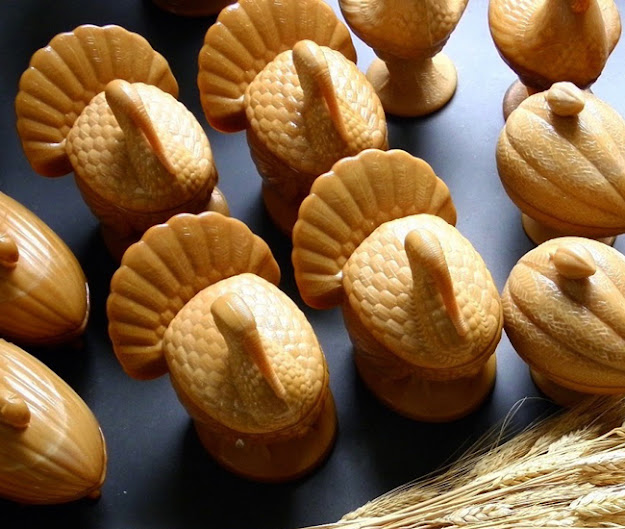 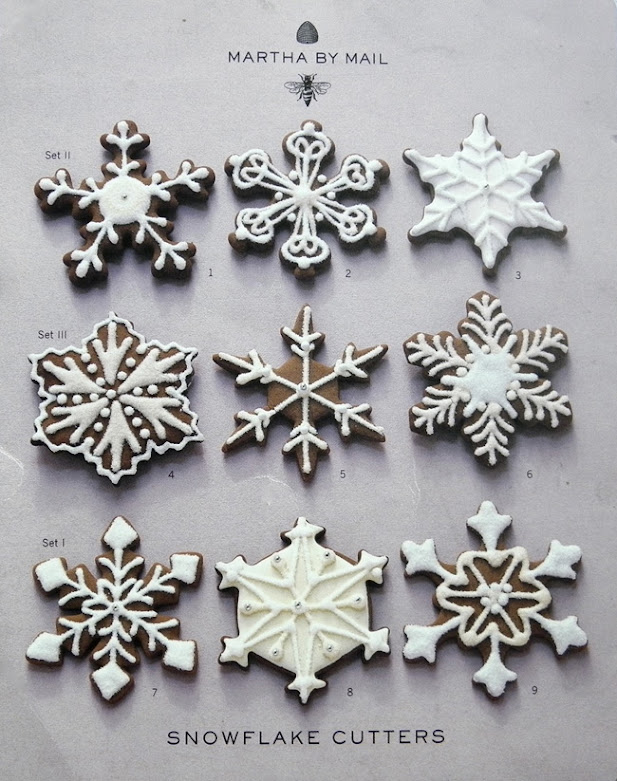 My friend David is an avid Martha by Mail collector and he has many of the prized items so many of us came to love, including the caramel-coloured glass cake stands by L.E. Smith, Fireking Jadeite, and a plethora of copper cookie cutter sets in myriad shapes and sizes. These are his images, above. Visit his blog to learn more about Martha by Mail.

While the business was successful for several years, its greatest challenge was maintaining a profit. It was an expensive project to run and it proved difficult for Martha Stewart Living Omnimedia to oversee not only the rapid design of products, with the promise of new offerings in each month's catalog, but also to manage its delivery processes. The catalog business was closed in the summer of 2004, which was also (not coincidentally) the summer Martha was sentenced to prison.

For collectors of the Martha Stewart brand, there is nothing more valuable than the products that were featured in the pages of the "Martha by Mail" catalogs. If the products are sealed in their original packaging, the items can fetch two or three times what they originally sold for. (Of particular interest to collectors are the cookie-cutter sets, the unique cake molds, cake stands and baking pans, the jadeite collections and some of the dinnerware and serveware sets.)

The catalogs themselves are highly collectible. At online auction sites, such as eBay, a single copy of the catalog can generate between $8 and $30, depending on rarity and condition, which is quite astonishing considering the catalogs were originally mailed to subscribers for free! A complete catalog set, like the one shown below, could fetch well over $1,000. Each of the catalogs that were issued by the company are shown below, in order of appearance, beginning with the early inserts that were included in the magazine. A very special thank-you to my friend Kenn for these scans!

These early inserts were included in the magazine: an introduction to the catalog to readers. 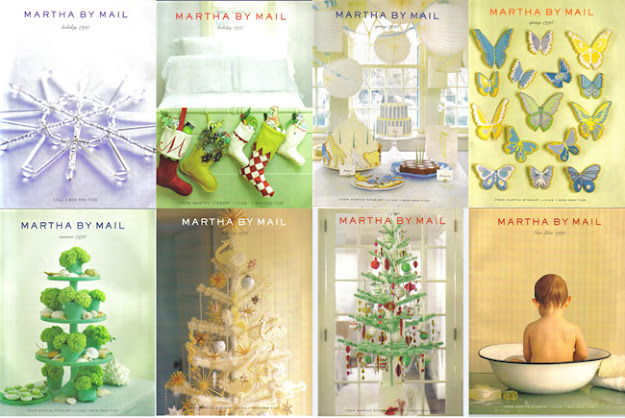 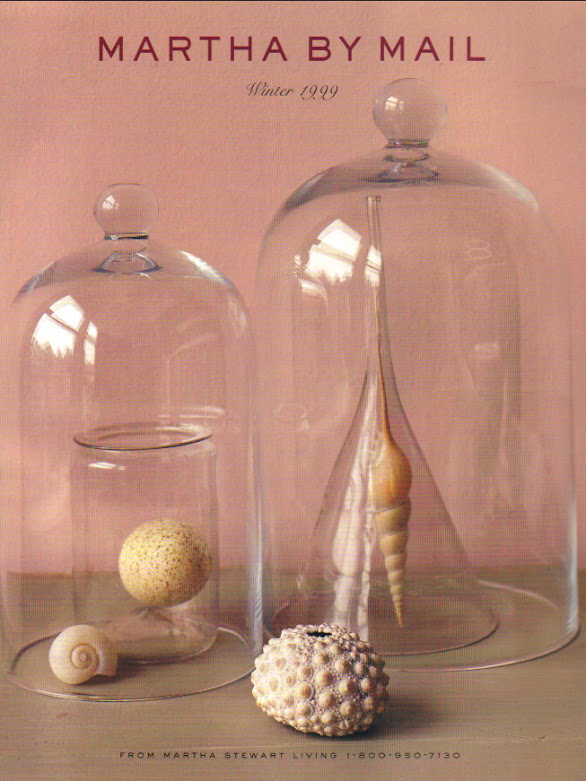 The imagery used on the covers of the catalogs was always simple but arresting in its beauty. 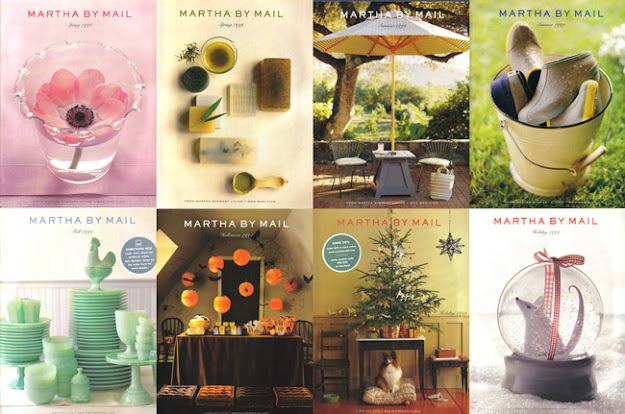 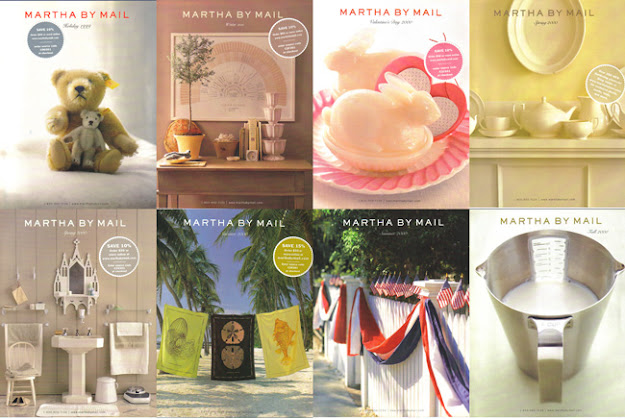 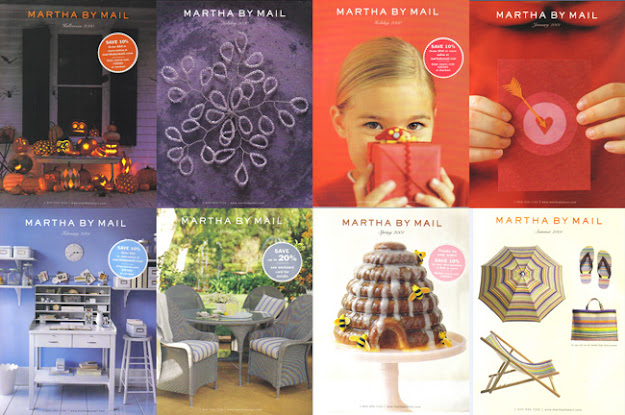 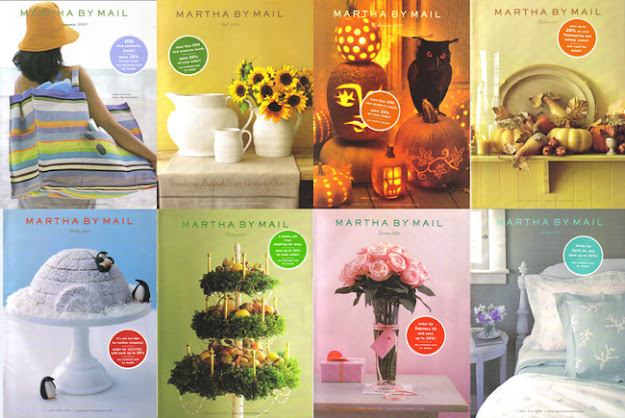 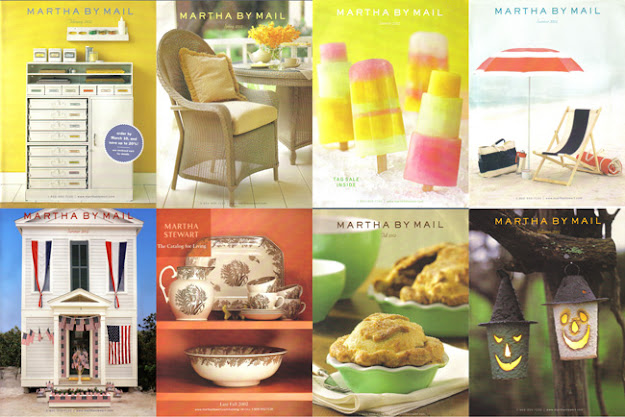 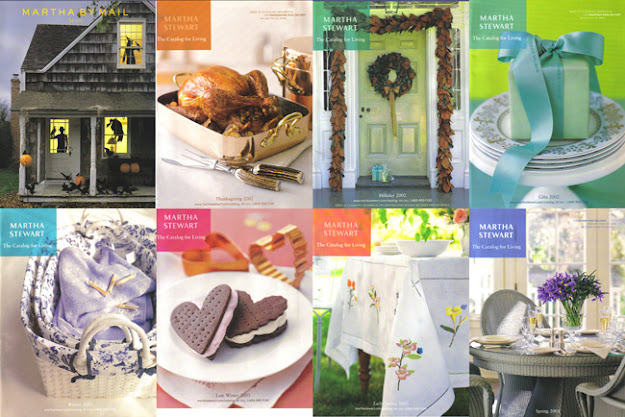 In 2002, when it became apparent that criminal charges would likely be laid against Martha Stewart the company renamed the catalog to "Martha Stewart The Catalog For Living". 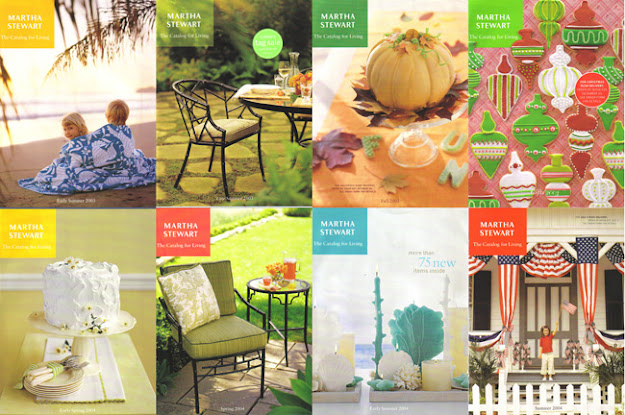 By 2004 and the impending trial of Martha Stewart, her name was significantly downsized on the covers. While the design may have changed, the products remained excellent!

Posted by ANDREW RITCHIE at 9:57 AM

I have many of these catalogs and I cherish them immensely. You know Andrew, I take a lot of inspiration from them & they're a great resource for me as a collector of Martha by Mail items. I vow to have some of these items as future Good Things on my blog! Thank you for posting this! I absolutely LOVE it!

David.. Thank you soooooo much for this information. I have saved, no on purpose,but dumb luck, most of these catalogs. My husband tossed some of these on a spree of "helping" clear out stuff. Let us never speak of this again...mistakes were made.
Now seeing this I went through my old Martha's and found a few of the first ones.
I love them. And it is nice to see how creative a period it was in Martha's company.
Wish I had had more expendable income and then all of those great products would now be in my home!

Wow! Thanks for preserving all those covers. Even though I was fresh from college I still managed to by a few MBM items. I cherish all those items today!

Looking at these, I realize how much of our newlywed income I devoted to MBM products. I still have all of them, though. My Burleigh Ware pitcher is cracked, but now I use an insert inside for a vase. I can't bear to get rid of it. :) I do think that this period was the very peak of creativity for them, and I miss that. I think I'll make the beehive cake for Easter. :)

Ah! How great. I cherish these as a part of many reminders of an amazing set of years. These pieces have travelled with my family and I to different countries and residences. The hanging starlight in every entry hall, octagon stem ware (I'd love even more), jadeite vase, cookie cutters for all occasions including hearts I made with the children's school classes every Valentine's. I miss this catalogue.

I loved MBM an cherish all of the items I purchased from the catalogs over the years. Just our of curiosity to you know who manufactured the apothecary jars featured in the catalog? They are very unique and I'm interested to know what else the glassworks have produced. Thanks.

I have an answer from you, directly from the person who was in charge of Martha by Mail at Martha's company during the early 2000s! The jars were originally purchased from a company called Serax and the manufacturers were based in the Czech Republic, a company called Laboratorni Sklo.

Hello, I was hoping to find Martha’s source for her antique wirework cooling racks which I know she had commissioned. Does anyone know who or what company she worked with to get them into her catalogs, pls? They are absolutely gorgeous. Thank you.

Hi Tina, Please visit goodthingsbydavid.com. He has a post about wirework on his blog and is a big collector of Martha by Mail items, including the wirework. He will have the answer for you!

I am trying to find a copy of the 1987 catalog on creating cookies. It has a cover with pastel colored heart shaped cookies. I have tried to find it online with no luck. I would really love to have the recipe for the cookies as well as the icing.