Every year my family gathers to make the annual Christmas cakes. This past weekend we all took part yet again. It involves not only baking, but wishing! Below are some of my photographs taken at this family tradition three years ago along with a description of the history of these traditional English cakes and the customary wishful stir that is involved while making them. I've also included the recipe. Hopefully I didn't miss a step in transcribing it! Enjoy!

For over 80 years, the descendants of the McLaren clan (my mother's side of the family) have been making wishes over bowls of raisins, cherries and nuts. If it sounds a little fruity, you're right. "We did it when I was a girl in England," says Valerie McLaren, my grandmother, whom I call Nana.


She, along with her sister, Eileen Hornsby, made traditional Christmas cakes with her family in Bedford, England, in the 1920s and '30s. Today, a variation on that same recipe and the tradition of the wishful stir are still enjoyed in the home of her daughter, Gail Ritchie, who also happens to be my mom.


"We'd take turns stirring the ingredients and making wishes as we stirred. It's an old English tradition," says Nana.


After adding several spoonfuls of mixed fruit and dry ingredients at a time, participants take turns stirring the luscious mass while making a secret Christmas wish. For the last nine years, this tradition has been enjoyed by four generations in our family - the most inclusive it's ever been - with the participation of my nephew Jacob and his dad (my brother) Adam. 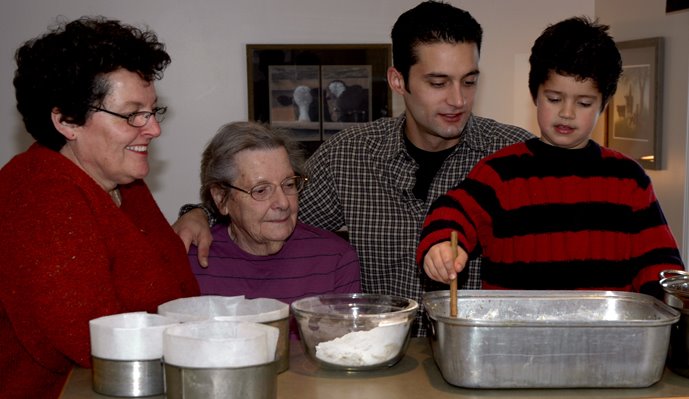 From left to right: My mother Gail, my grandmother Valerie (85) and my brother Adam look on as my nephew Jacob makes his holiday wish. 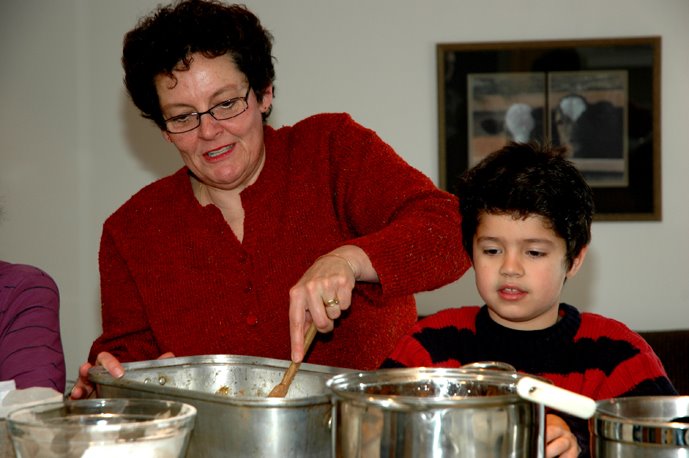 My mom makes her annual wish with a good stir of the ingredients. It's important to keep the wish a secret!


The scene is my parents' kitchen in Osgoode, just south of Ottawa, where three lined and buttered cake tins await the gigantic batch of batter, nuts, raisins and candied fruit, which is all mixed in a huge roasting pan for convenience.


It should be noted that this recipe is NOT a fruitcake, despite the copious amounts of fruit in it. My grandmother, and her ancestors, all referred to it as Christmas Cake, and fruit cake was something else entirely: more cake-like with the odd bits of candied fruit and sometimes a smear of thick white icing on top.

This cake mostly consists of mixed fruits and nuts with a hint of batter to hold it all together, giving it an extremely dark, dense and robust texture and appearance and an almost intoxicating flavour when served: deeply rich. 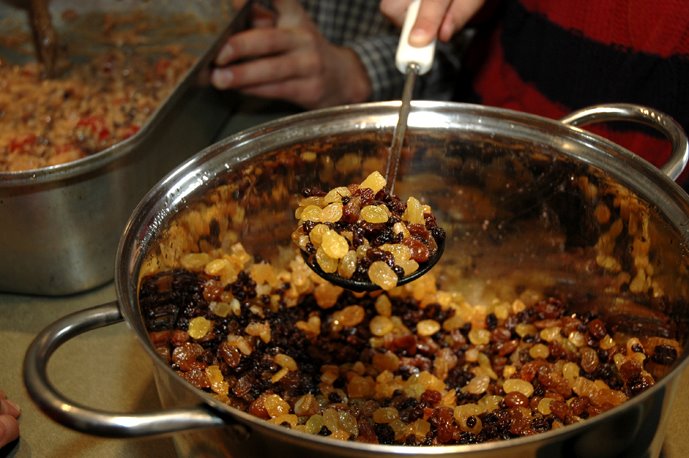 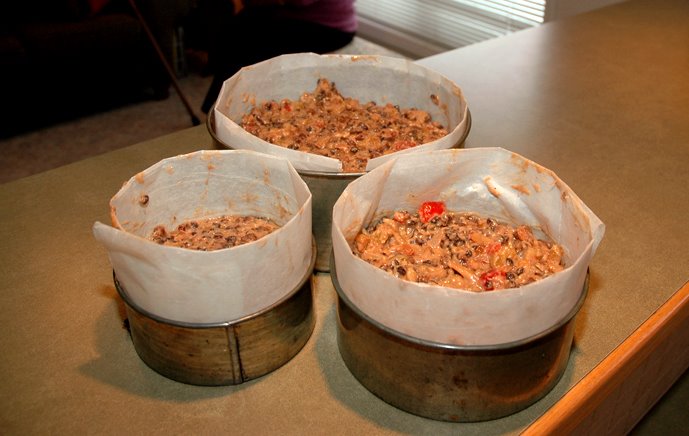 The three sizes of cake tins are shown with the unbaked batter. The tins are prepared by lining them with greased parchment paper on the bottom and along the sides. This ensures they do not stick to the pans and helps to easily remove them.


Many fruitcake snobs lower their defenses when presented with a moist slice of this decadent dessert, which is best enjoyed on its own, either cool or slightly warm. Nana permits serving it with tea, coffee, sherry or cordial but please no eggnog: the richness would overpower you.


The recipe below makes enough for three cakes in three sizes: a 5 and a half inch pan, a 6 and a half inch pan and a 9 inch pan. The smallest cake size is ideal to give as a gift to any dessert-lover on your list. Two 9 inch pans would work to make two large cakes instead. These cakes are ideally made a few weeks before Christmas to allow the flavours to develop. Once cooled, the cakes should be tightly wrapped in Saran and then again in foil and kept in tins in a cool, dark place until they’re ready to serve. 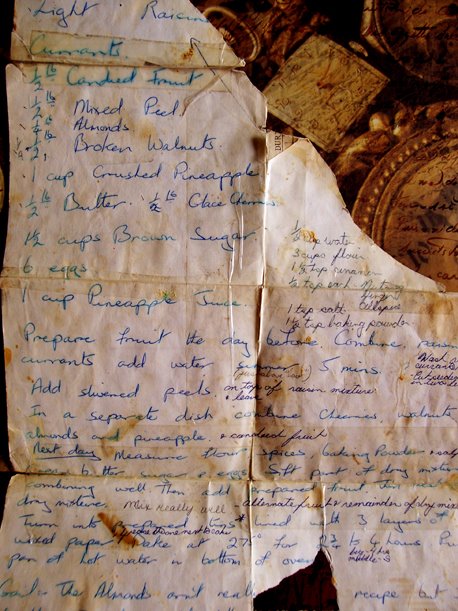 I took a photograph of the original recipe that my grandmother wrote out for my mom in 1973, the year she was married. As you can see, it's been well used since then: torn, burned and pieced together with tape.


Next day: Prepare three round cake tins of varying sizes (9 inches, 6 + half inches, 5 + half inches) or two large tins (9 to 10 inches) that are at least four inches deep by lining them with three layers of parchment, greasing the layer that will touch the cake mix


Preheat the oven to 275
Measure flour, spices, baking powder and salt into a bowl
Whisk to combine
Cream butter, sugar and eggs into a large mixing bowl (a deep roasting pan works well for a recipe this size)
Sift part of dry mixture into butter mixture
Combine well


COOKING TIPS -Place a shallow pan of water at the bottom of the oven before baking to ensure the cakes retain their moistness. -When cooling the cakes, place clean, damp dish towels over them to keep the moisture in.

The finished cake is a dark, rich treat that looks festive when decorated with glazed pecans, dried figs, almonds and other glazed, dried fruits. (The topping is optional and we rarely apply it since the cake itself is rich enough.)
ANDREW RITCHIE at 2:02 PM