Martha in the Grocery Aisle

From apple crisp to chicken cacciatore, Martha is bringing a line of 40 different frozen foods to grocery stores across the United States, with plans to expand the line for holiday and beyond. Martha Stewart Kitchen was not conceived as a frozen foods brand, but it was the area of grocery product development that showed the greatest potential for success, according to Ken Venturi, CEO of MSK Foods, a subsidiary of his company Mediacast Holdings. (Venturi has partnered with Marquee Brands, which owns the Martha Stewart brand, to develop the new kitchen line). 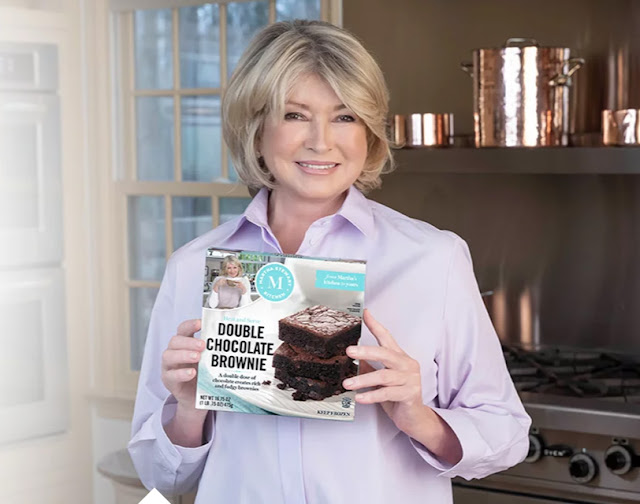 All of the frozen foods on offer were based on recipes developed by the Martha Stewart Test Kitchens and span the whole gamut of prepared meals, from appetizers to mains to sides to desserts. The line is touting itself as a 'higher end' alternative to the more staid fare in the freezer section, using more vegetables, international flavours and fewer preservatives. Some of the offerings include baked brie, mini quiches, pigs-in-a-blanket, scalloped potatoes, beef pot roast, chicken curry, chicken and mushroom pot pie, apple hand pies, chocolate brownies, mixed-fruit crisp, and carrot cake.

This is not Martha's first foray into packaged foods. In 2008 she developed a limited grocery line with Kirkland Foods for distribution at Costco stores. She later developed a line for JC Penney called Martha Stewart Pantry, which included items such as baking mixes, mixed nuts, crackers, sauces and marinades. Even her QVC and Macy's line had some food and pantry items on offer. Martha also has ongoing partnerships with True North Seafood (frozen fish), iGourmet (food gift baskets) and Marley Spoon, a successful meal-kit distribution service.

It will be interesting to see how successful this line becomes and whether it will expand to international markets, such as Canada. There are plans to expand the line beyond the freezer aisle as well: soups, sauces, dips, cake mixes, etc. I've heard from some Martha Stewart fans who have tried the items, which are already appearing in grocery stores, and the verdict has been unanimously positive!

Visit Martha Stewart Kitchen to find out where these foods are available.

Posted by ANDREW RITCHIE at 9:23 AM

No grocery stores listed for my area. San Francisco, CA.

They are working on adding more stores.