If food be the music of summer, play on! June has become the annual food issue of Martha Stewart Living in recent years and the 2021 edition is no exception. I have to admit that there is something about summer food that is so alluring. Maybe it's all that fresh produce at the supermarket. Or maybe it's the way we tend to prepare summer foods (casually, alfresco, oven-less) that bolsters its charm. Whatever the reason, I'm always down for some good summer fodder. 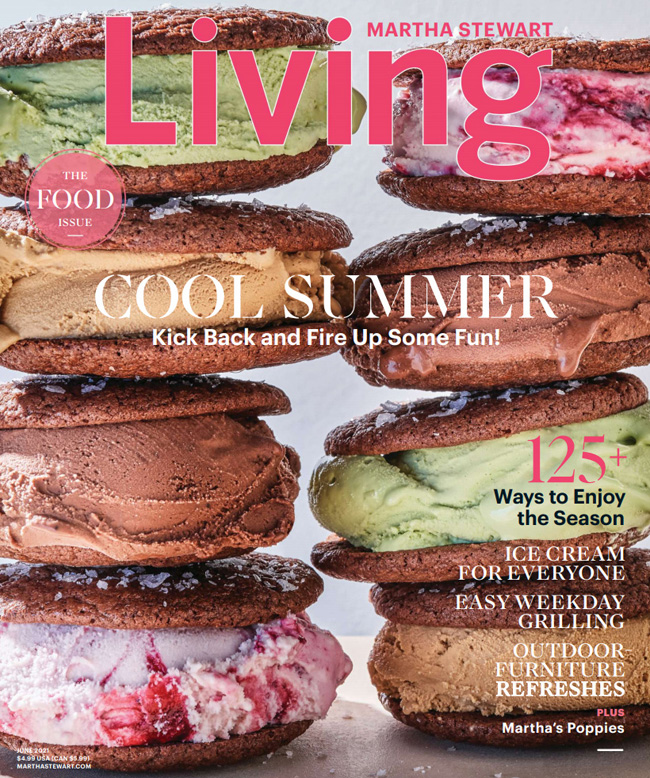 The cover is a riot of homemade ice-cream sandwiches, stacked aplenty. If you know my little pet peeve about photos of stacked food on magazine covers, then you'll know that this cover was a little triggering. (If you don't know about it, click here). And yet, I found myself wanting to reach in and grab one all the same, which is really the point, isn't it. The photo, by Con Poulos, is more than effective in this way. 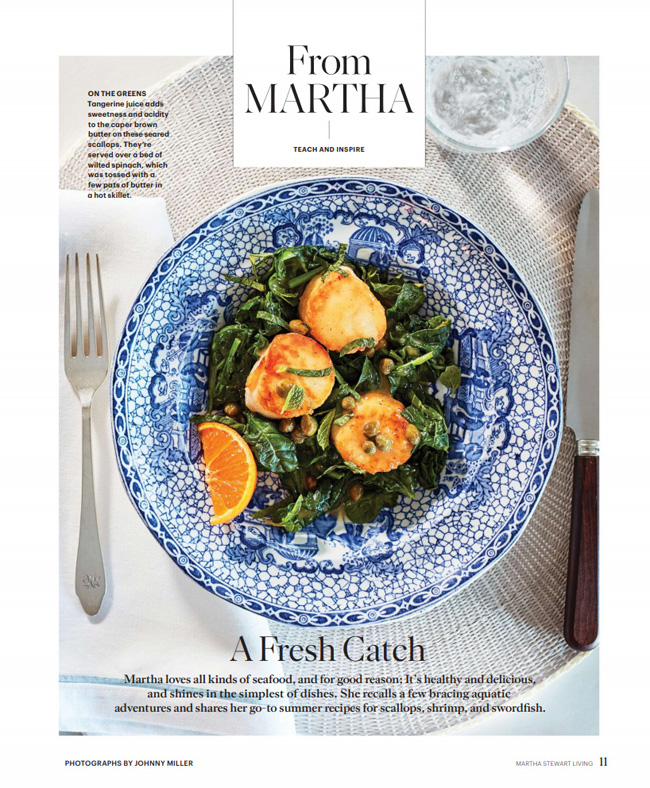 Martha's column is all about fresh seafood, another summer staple I find myself annually drawn to. Her recipe for crunchy shrimp fritters on page 13 has been bookmarked and will likely be made for the Canada Day long weekend. A simple batter of rice flour, baking powder, club soda and egg makes it a cinch. 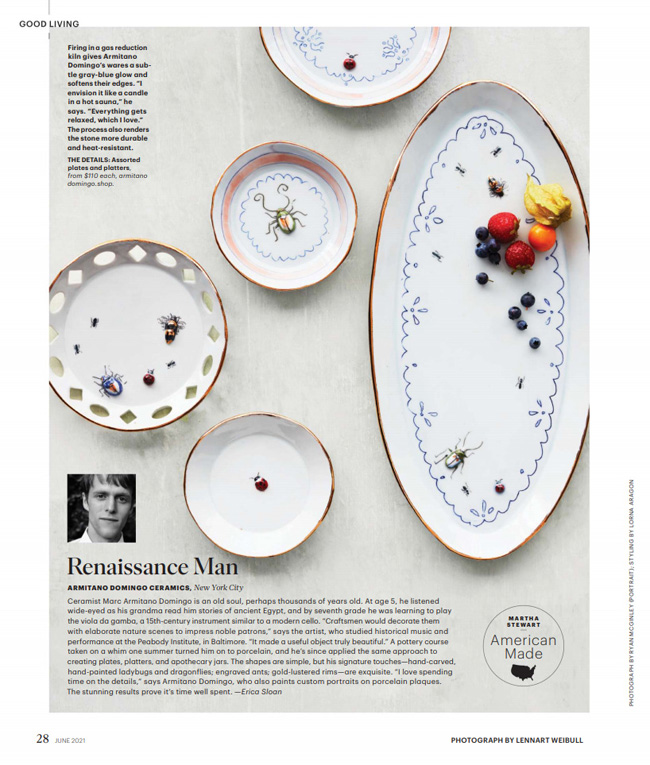 My favourite find in this issue is Armitano Domingo Ceramics - the subject of the magazine's American Made feature on page 28. Ceramicist Marc Armitano Domingo creates beautiful porcelain pieces in simple, delicate shapes, which he then embellishes with hand-carved edges and whimsical painted details, such as garden insects and filigree. I'm in love. 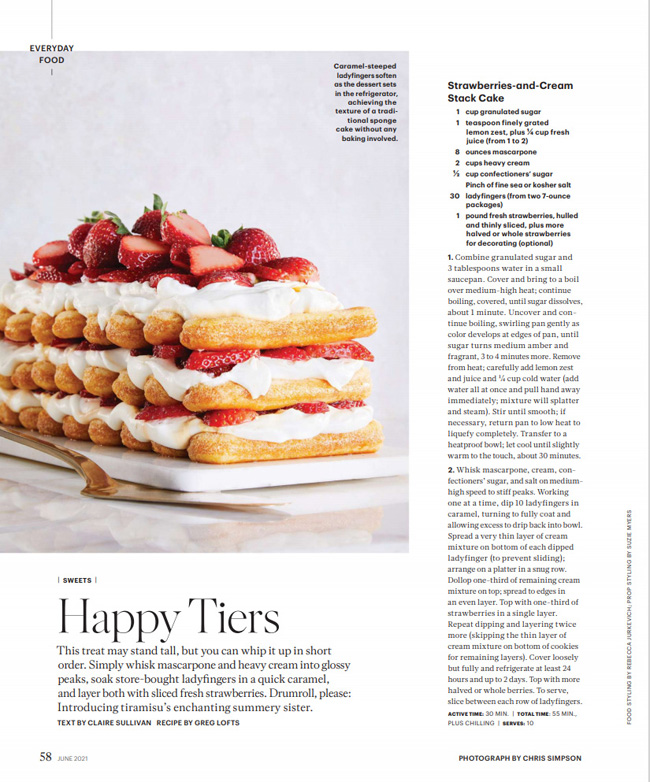 This Everyday Food dessert on page 58 is a fun hybrid: tiramisu meets trifle, without the dish. Layers of ladyfingers soaked in a lemon-infused caramel sauce are stacked with generous sheets of silky, sweetened marscapone-whipped-cream and fresh strawberries. It may not make pretty slices, but the 'ta-da' moment when it's presented at the table and the bursts of flavour in your mouth make it drool-worthy. 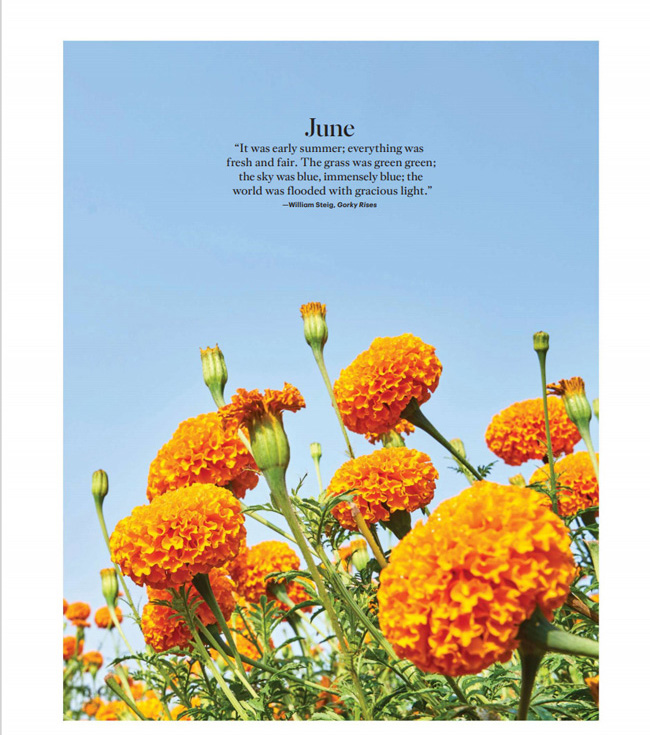 The splash page, with its bright orange flowers silhouetted against the bright blue sky, just shouts summer. The quote, by author William Steig, is a nice tribute to the season. Photo by Gentl + Hyers. 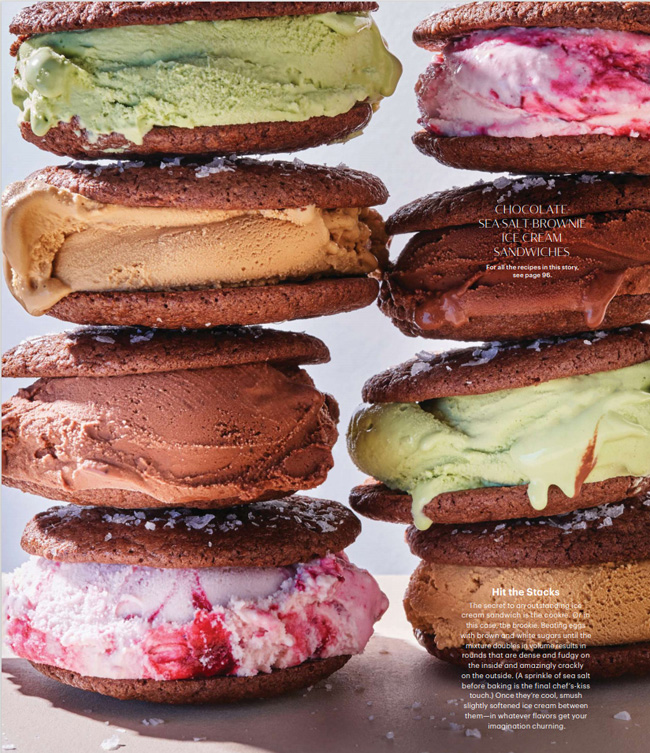 Six glorious ice-cream desserts are featured in the opening of the well. The aforementioned sandwich cookies (shown) being my favourite. But there is also a frozen cafe-mochaccino tart that has my name on it. The photos in this feature by Con Poulos are among the best in the issue. 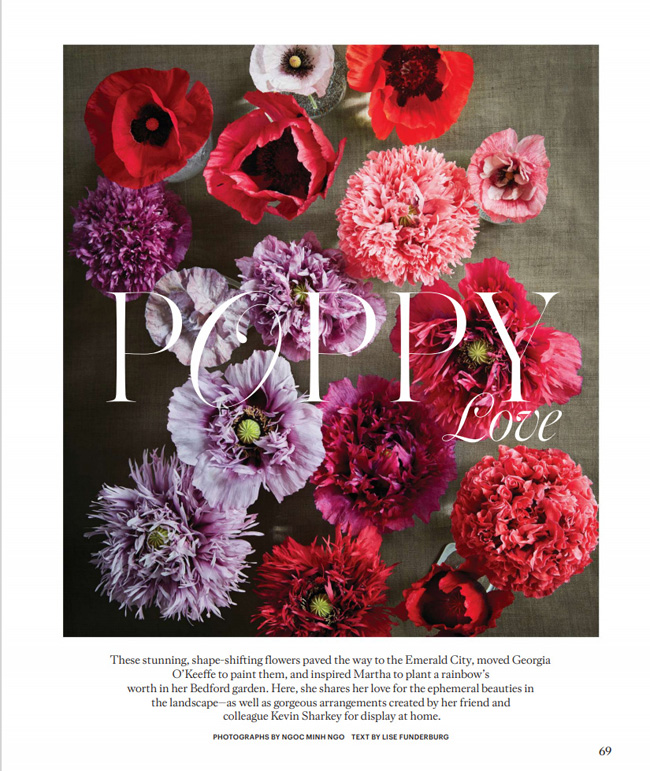 The poppies of Martha's cutting garden are explored in a beautiful feature that takes us through the varieties she grows at her farm in Katonah, New York. Arrangements by Kevin Sharkey that employ the use of these poppies make the article ever more seductive, with photography by Ncog Minh Ngo. 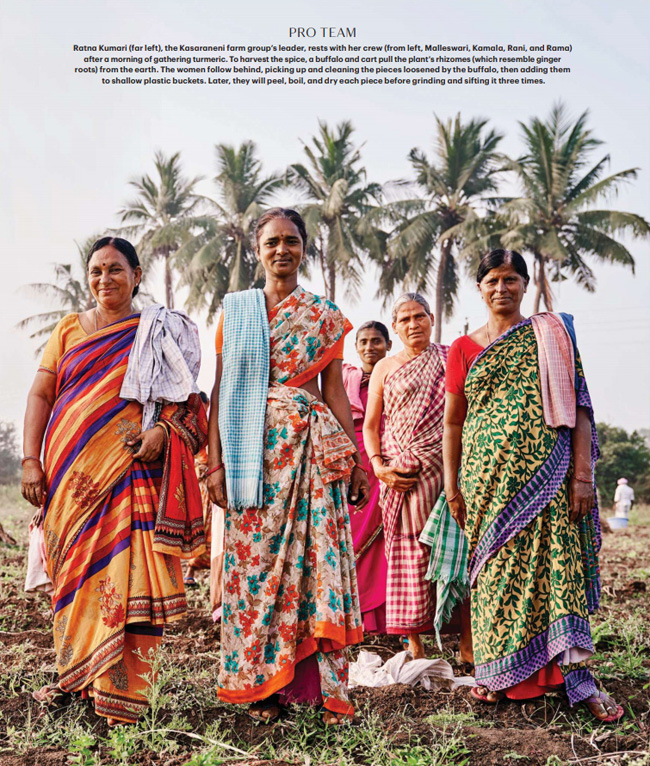 The best feature in this issue, to me, is Spice of Life, which begins on page 74. Learning about the intrepid founder of a California spice company called Diaspora Co., which specializes in the importation of the best Indian spices to the United States, was as much a tribute to community as it was to entrepreneurship. Sana Javeri Kadri founded her company with the aim of also offering fair pay and equitable partnerships to the farmers across India where she sources her grains and spices. Exeruberant photographs by Gentl + Hyers perfectly illustrate the connection between heritage and a passion for sustainable regional produce. The story is the perfect centerpiece for the annual food issue. 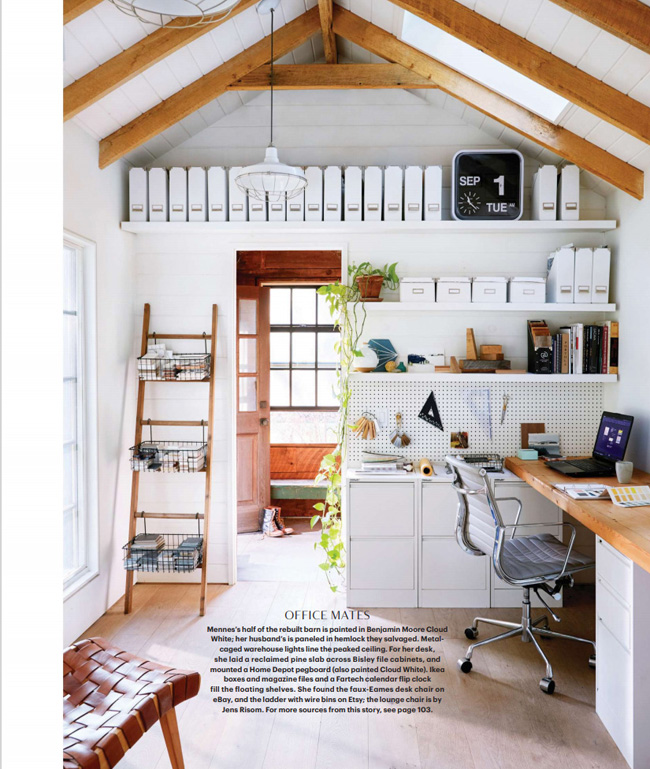 The breezy restored home of architect Annie Mennes in upstate New York is the subject of the magazine's decorating feature. I love how she has blended work spaces and play spaces so seamlessly with living spaces. The home is casual and clean but still noteworthy for the celebration of its old bones with new materials and a bright perspective. 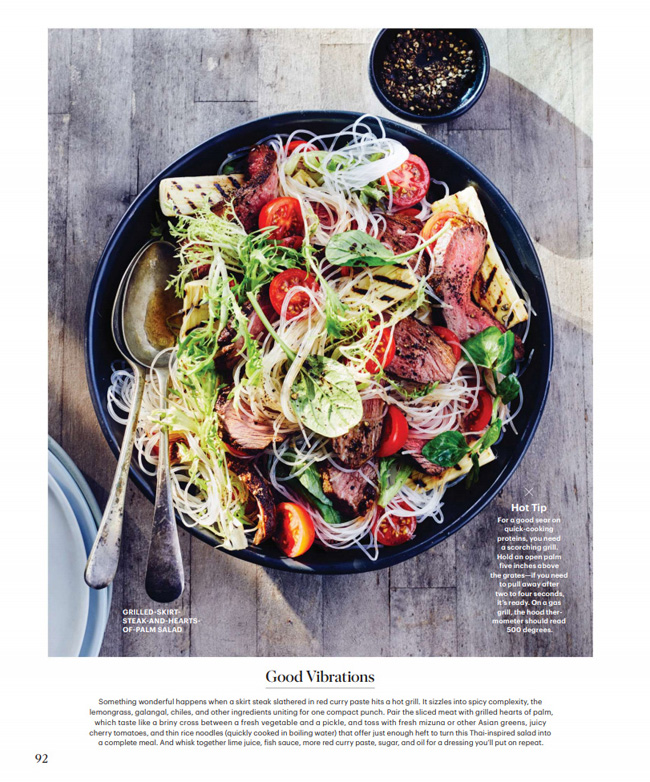 And, of course, a June food issue is not complete without a feature on grilling. Americans really do love their grills. If I'm honest, it is probably my least favourite form of cooking, both in terms of process and taste, but I get its appeal: I won't say no to a grilled hamburger if one is handed to me! 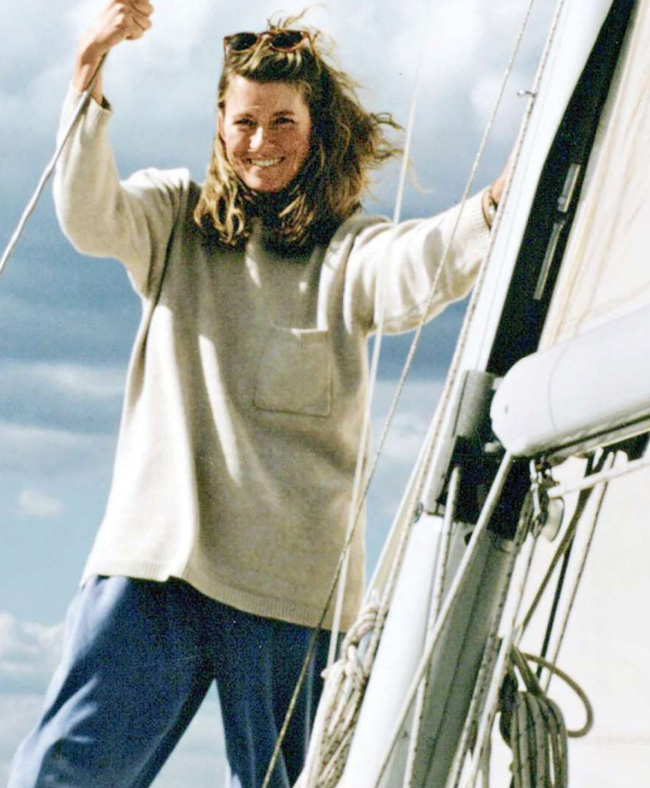 The issue closes with a beautiful photo of Martha in 1970 navigating the sails of a small Laser on the open seas: always up for adventure!
JUNE ISSUE HIGHLIGHTS:
Favourite Good Thing: Weave Got It - DIY braided bracelets
Favourite Recipe: Crunchy Shrimp Fritters
Favourite Find: Armitano Domingo Ceramics
Favourite Feature: "Spice of Life" by Christine Chitnis and Gentl + Hyers
Posted by ANDREW RITCHIE at 9:47 AM