May is, without a doubt, my favourite month of the year. (A close second is October, but for entirely different reasons). May is a blossoming burst of exuberance in the city where I live: tulips and daffodils springing up everywhere, leaves unfurling, cool breezes and a warming sun. It's so idyllic. The May issue of Martha Stewart Living is often a perennial favourite of mine. As I've said here so many times before, no other magazine I know of can so brilliantly celebrate a given month with such fervor and grace, diving into all the things that make the month worth enjoying. 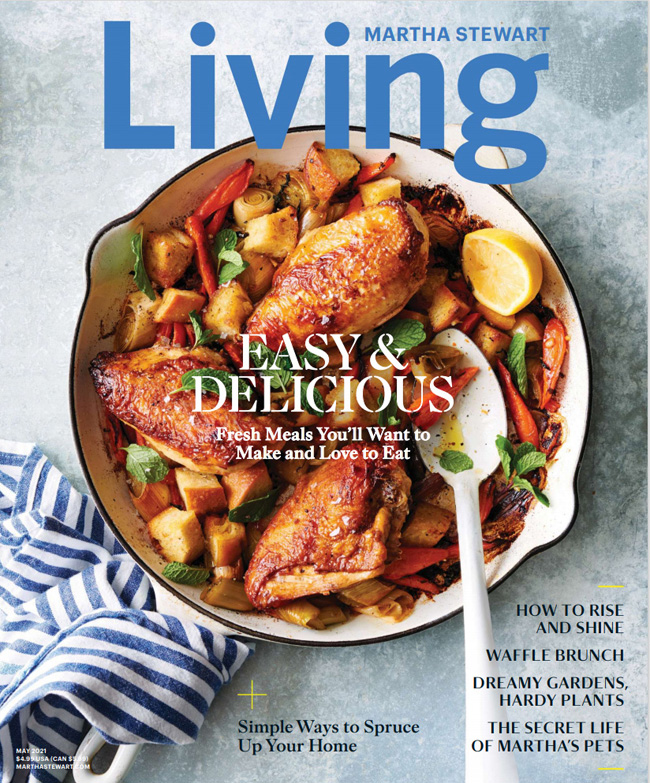 The May 2021 issue is what I might call a quieter reflection on the month at hand, but that's ok. I was hoping for a cover with a photograph of a big bouquet of tulips, or a meandering garden scene lit by the morning sun. The pan of chicken and vegetables looks scrumptious, to be sure, but to me felt a little underwhelming for the month of May. (And, yes, I know that magazines with food covers sell better at the newsstand than a cover depicting anything else. The company does need to protect its bottom line).

Still, the issue has some gorgeous content, which has kept me coming back for multiple readings. 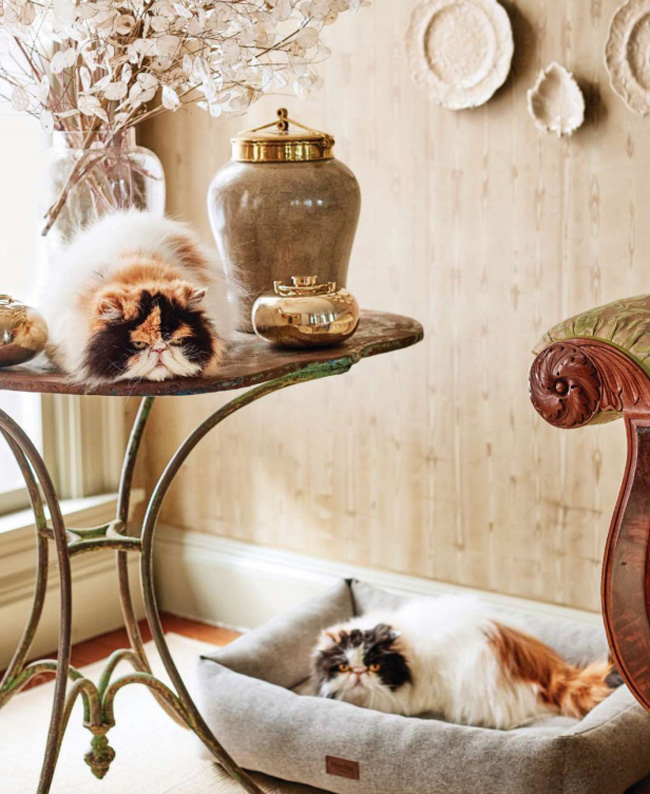 Martha's column this month is all about her famous pets: four dogs, two cats, 14 parakeets, and dozens of canaries. This image above, by photographer Johnny Miller, of her two calico Persians lounging in the sitting room off her kitchen is superbly iconic. All the "Martha" signposts are there: the faux-bois, the gray, the antique furniture, the perfect pairing of new with old. Oh yes, and the fluffy kitties too. 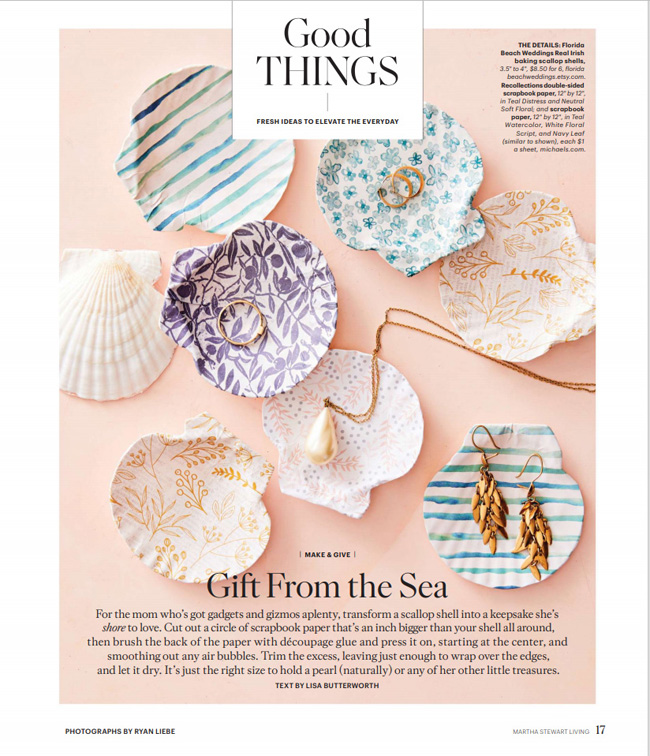 The Good Things section has a nice nod to Mother's Day gifting and crafting. I adore these DIY seashell keepsake trays. Fancy paper is simply decoupaged to the inside of scallop shells (available at crafts stores or online) and left to dry. They make a perfect, handmade dish to give to mom (or anyone) with some jewelry or another keepsake token. Easy tea sandwiches and a new take on cinnamon rolls, also profiled in the Good Things section, are tasty possibilities for a Mother's Day luncheon. 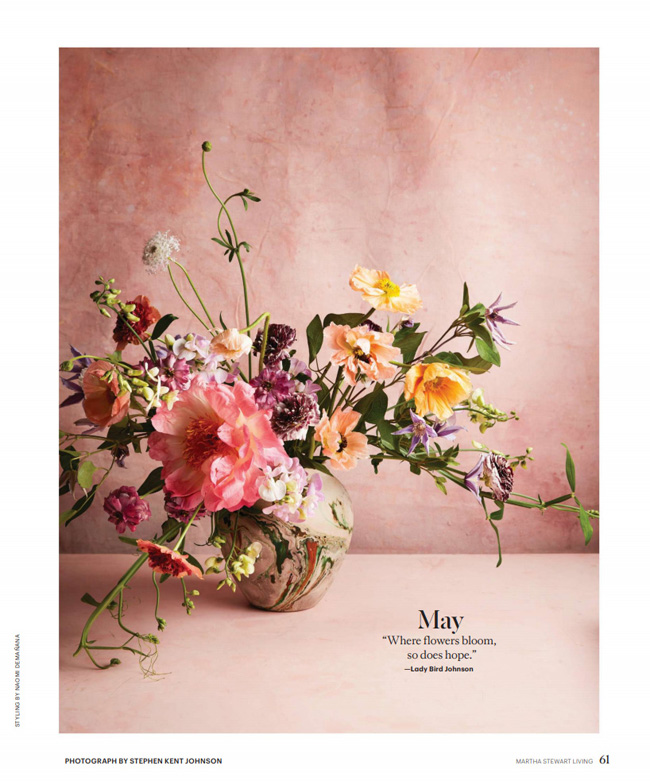 This image by Kent Johnson would have made such a splendid cover, and I'm sure it was a contender. The splash pages of Martha Stewart Living are something I look forward to each issue: both the image and the quote or saying. 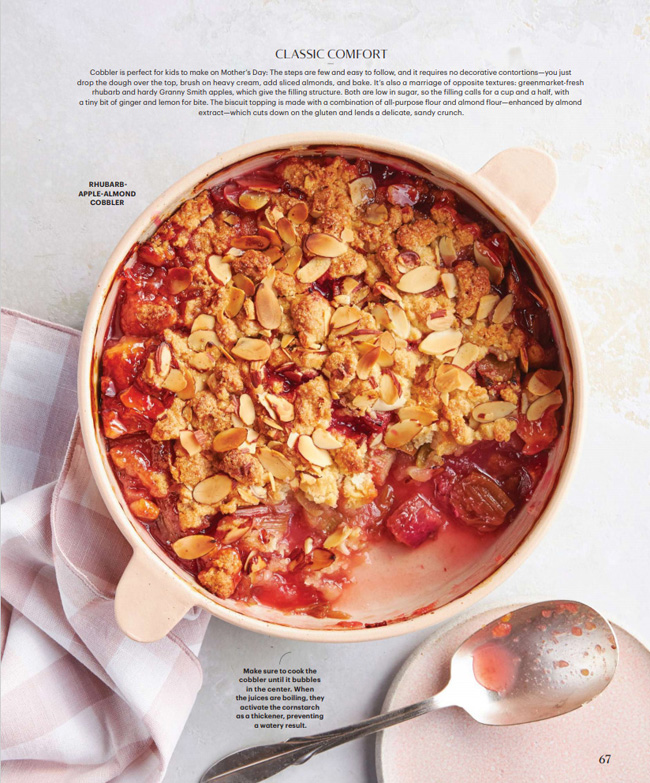 Rhubarb is one of Martha's favourite vegetables - one of only a few vegetables that lend themselves perfectly to delicious summer desserts, such as this rhubarb-apple-almond cobbler, which I intend to make next month when rhubarb is in season here. A plethora of rhubarb recipes in this opening feature, including one salad, are welcome to this reader! 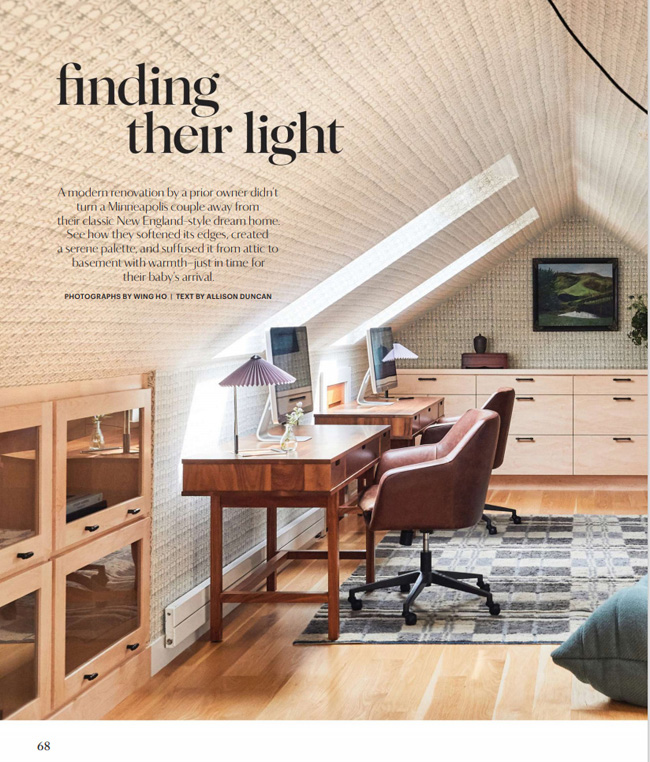 Oftentimes, home renovations seek to bring modernity to a traditional space. For the Minneapolis couple featured in this article, the opposite was true; they needed to soften the edges of a home whose previous owner, a strict minimalist, didn't quite fit their lifestyle. Warm woods and luxurious wallpapers add texture and warmth to a bright and airy space. There were lots of good design lessons here. 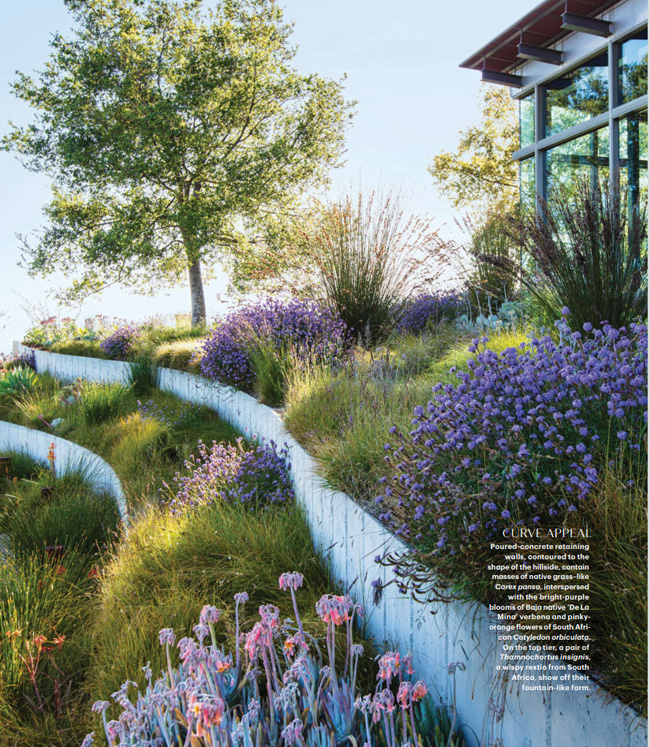 Kudos, once again, to the editors for always including a gardening feature in every single issue of the magazine. For awhile, several years ago, that wasn't happening. I think it's so important to keep that core content area alive for its readers. This particular seaside garden on the coast of Southern California is a virtual Eden! It is paradise. I was so seduced by the photographs by Claire Takacs, which perfectly demonstrate the thoughtfulness and ingenuity that went into making this garden feel modern, appropriate to the region and perfectly aligned with the style of the house it surrounds. 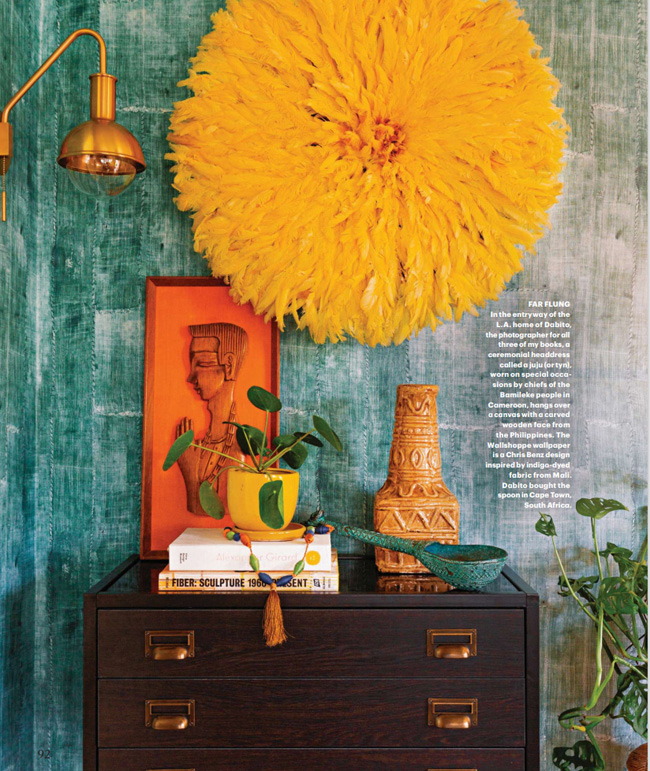 Perhaps my favourite article in the issue was the closing feature, courtesy of artist and designer Justina Blakeney, whose new book Jungalow: Decorate Wild is an unadulterated celebration of using colour and texture indoors. Blakeney provides three basic guiding principles to achieve an exuberant, colour-saturated look in your rooms: Forage for Colours, Bring the Outdoors In, and Mix Styles You Love. 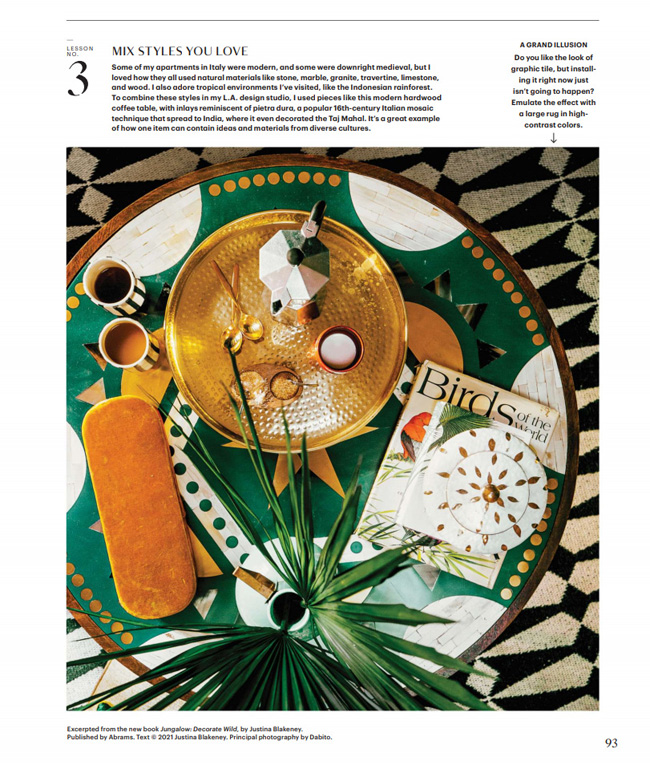 Overall, the issue was engaging, beautiful and informative. If I learn something new, glean a new recipe, and feel inspired then the issue has done its job.
MAY ISSUE HIGHLIGHTS:
Favourite Good Thing: Gifts from the Sea page 17
Favourite Recipe: Rhubarb-Apple-Almond Cobbler page 67
Favourite Find: Webstaurantstore.com
Favourite Feature: "Going Boldly" by Justina Blakeney and Dabito, page 88.
Posted by ANDREW RITCHIE at 11:50 AM

Did you try the Rhubarb Cobbler yet? Rhubarb just came into season in my state and I made my first strawberry/rhubarb slab pie of the season. I was just curious if you were in season and you made it yet.

June is rhubarb season here in Ottawa, Canada, so I definitely intend to make it then! I will share when I do!