The March issue of Martha Stewart Living has been out for a couple of weeks now but I always like to do a brief review/synopsis of each issue of the year: a monthly check-up, as it were.

If you read this column regularly, you'll know that as a longtime subscriber I've been really happy with the quality of the magazine over the last three years or so. I feel Elizabeth Graves has done an excellent job as the editor-in-chief. Her job, by the way, is not at all simple. She must keep pace with the times while simultaneously avoiding trendiness; she must keep her finger on the pulse of Martha's longtime readers while simultaneously attracting new ones to the fold; she must encourage advertising while keeping the content as authentic and grassroots as possible; she must incorporate Martha's content while not making the magazine solely about her. And she must perform all of this within the parameters of a strict budget during a global pandemic under the management of a larger magazine publishing corporation (Meredith Corp.) I applaud her because the magazine isn't just 'surviving' - it's thriving.

The March issue is just another example of this well-choreographed balancing act; somehow it achieves it all. There are excellent recipes, plenty of decorating and homekeeping advice, lots of "Martha", plus the introduction of new faces, as well some familiar ones, including Martha's niece, Sophie Herbert-Slater, who was a regular on Martha's early television program. For this issue, the publishers opted for two unique covers: one for subscribers and one for the newsstand. I am, of course, partial to the subscriber cover with its beautiful photograph of an arrangement of hanging plates and platters in one of the sunny rooms at Cantitoe Corners, Martha's farm in Bedford, New York. The newsstand cover is also warm and inviting with boules of radiant-looking sourdough loaves nestled into a large wooden bowl: the comfort of warm browns and the implied aroma of freshly-baked bread is never a bad thing. 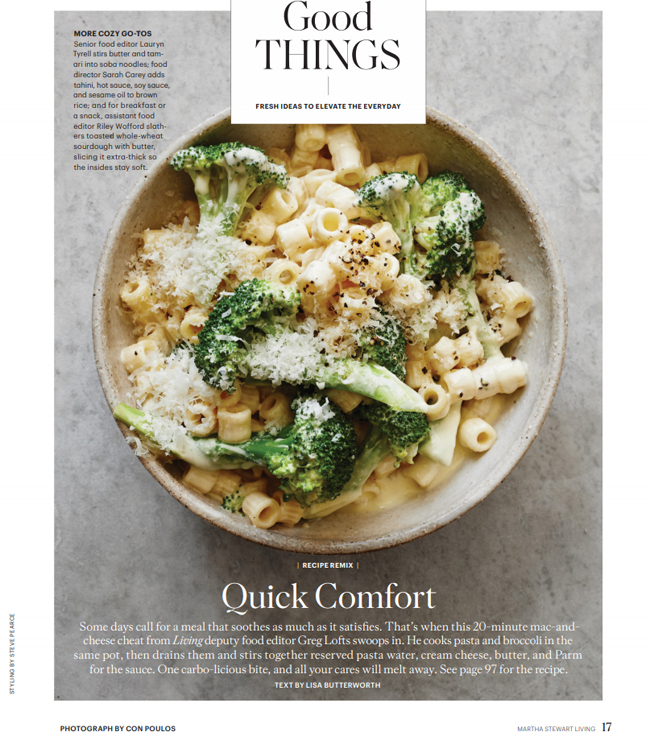 I don't recall exactly when food and recipes were incorporated into the Good Things column, but I'm not mad at it. Oftentimes it is the simplicity of the technique that is the Good Thing in question, such as the "Cheater's mac-and-cheese" dish featured on the opening page of this section, which takes just 20 minutes to make. It looks and sounds delicious! Other ideas in the column focus on St. Patrick's Day (cloverleaf ice-cubes, growing oxalis) as well as organizing and repurposing ideas focused on your tool box and hardware. 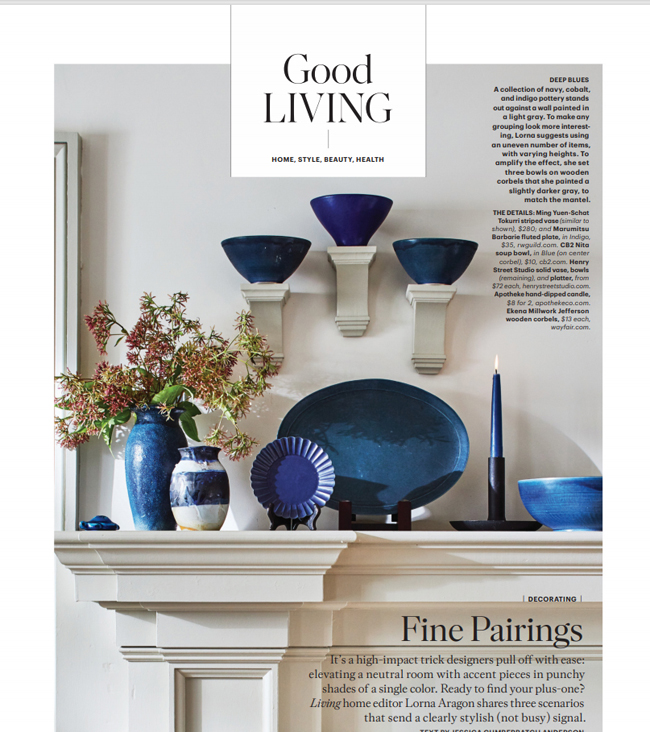 I always look forward to the Good Living section. In this issue it's all about introducing hits of colour into mostly-neutral rooms to achieve a bit of pizzazz and interest. The simplicity of the projects make them easy to try for a spring refresh in those dozy rooms in your house that seem to be crying out for a bit of fun. 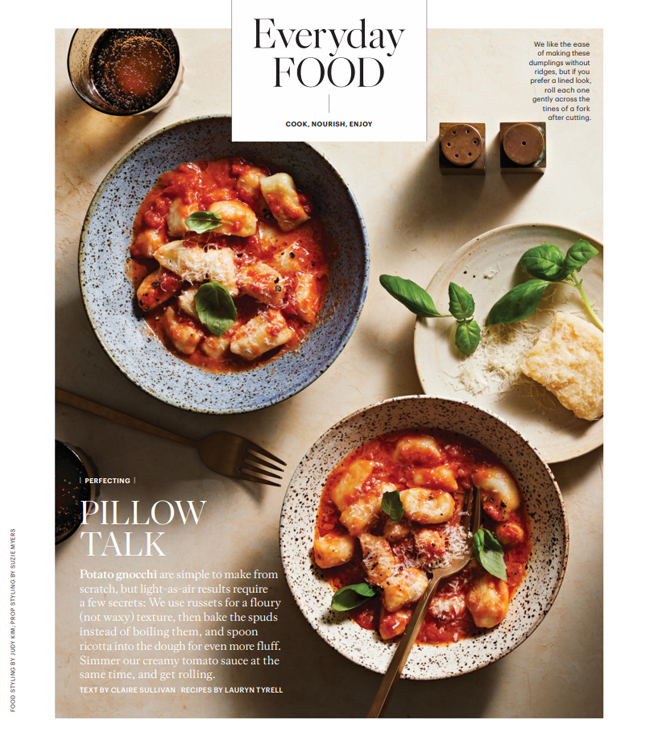 Speaking of fun, the Everyday Food section includes a recipe for something I've always wanted to try making: traditional gnocchi. The recipe is simple and straightforward enough to entice me to try it this time! There's also a nice section on sheet-pan dinners with an emphasis on getting dinner on the table fast without much fuss or cleanup, although never compromising interesting flavours and deliciousness. 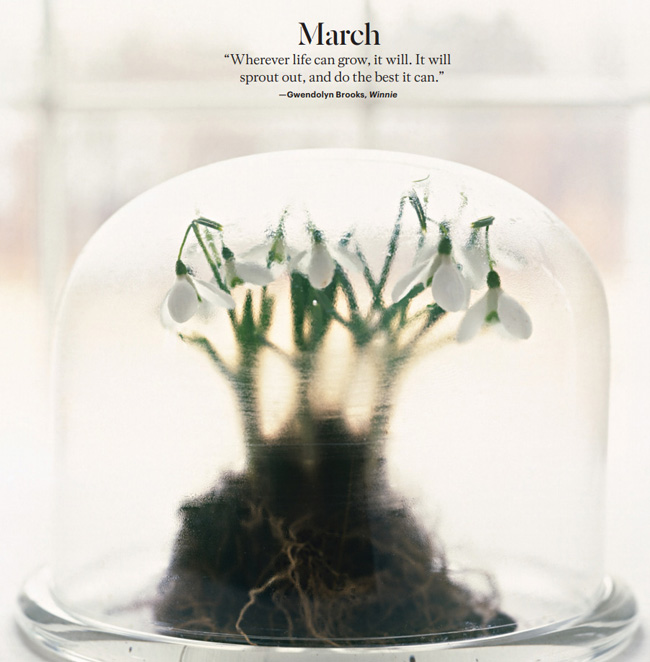 The quote on the splash page of the magazine is by Gwendolyn Brooks, the first black woman to win the Pulitzer Prize for poetry in 1950 for her book of poems called Annie Allen. She is also a United States Poet Laureate and the recipient of the Robert Frost Medal. I think the magazine is doing a nice job of incorporating black voices (and faces) into the magazine's content without feeling performative or didactic. It feels genuine, stemming from a legitimate and appropriate interest in amplifying black voices in its pages. 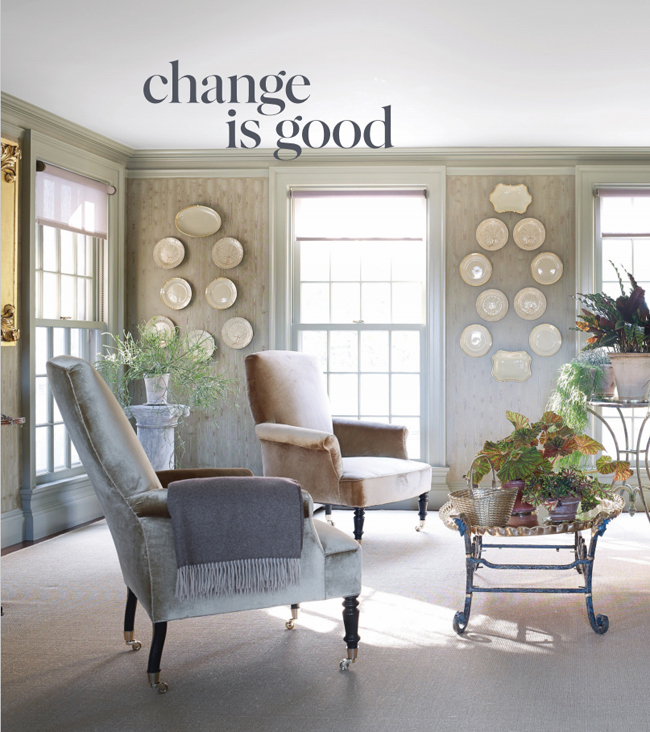 The well of the magazine opens beautifully with a look at how Martha has refreshed and repurposed several of her rooms at Cantitoe Corners during the pandemic (with the help of her friend and colleague, Kevin Sharkey) to become better suited to her changing habits and needs. Once a small formal dining room, the room shown above is now a bright sitting room just off the kitchen servery where Martha can sit and read. At the other end of the room, a small dining table is ideal for conducting Zoom meetings or enjoying a simple breakfast or a cup of coffee, overlooking the farm. 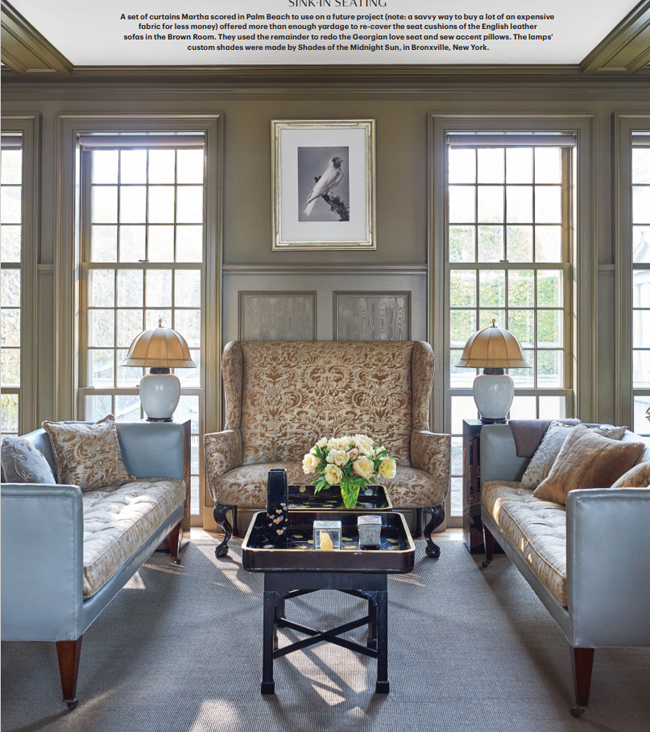 In Martha's large Brown Room, at the other end of the house but still connected to the kitchen, Martha used a set of curtains she found in Palm Beach to upholster the seat cushions of the English leather sofas, shown above. The remainder was used to redo the Georgian love seat and sew a few accent pillows. Changing up the house to suit your current living habits is such a good idea, as is using old finds in new ways. And spring is the perfect time to do so. 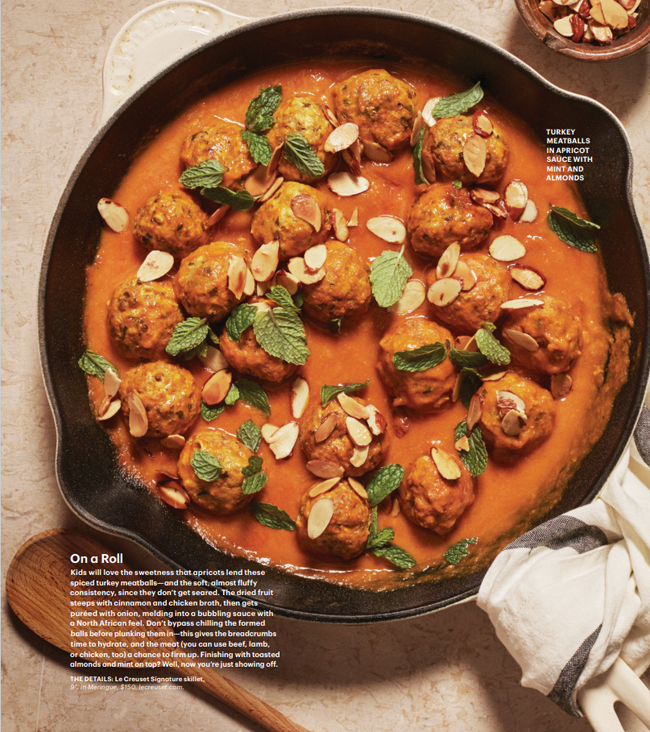 A feature on braising results in some delicious-looking recipes in this food feature. The turkey meatballs in apricot sauce with mint and almonds, shown above, look so good! I think they would be excellent in a meatball sub! 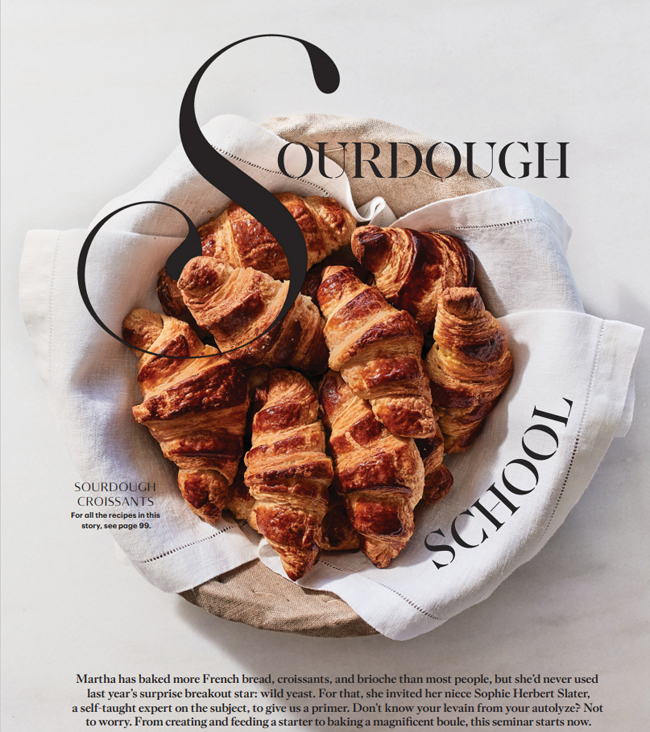 Sourdough everything! If you were locked down at home during the pandemic and had an inclination to bake, the word "sourdough" surely became part of your culinary vocabulary. It emerged as one of the biggest food trends of 2020. Sophie Herbert-Slater, Martha's niece, was one of the many sourdough aficionados who became enchanted by its many uses. She, along with Martha and food editor Sarah Carey, expand its uses into unexpected offerings in this feature, including croissants, banana bread and chocolate-chip cookies! 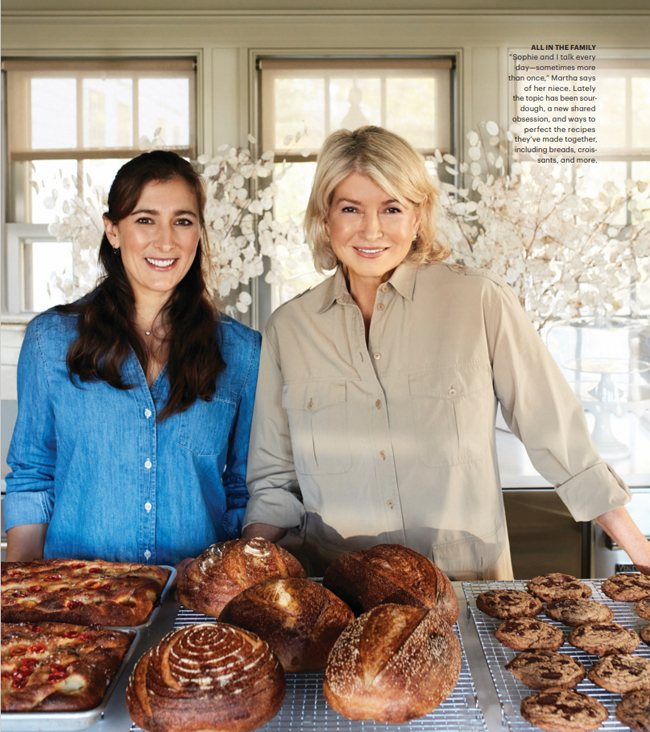 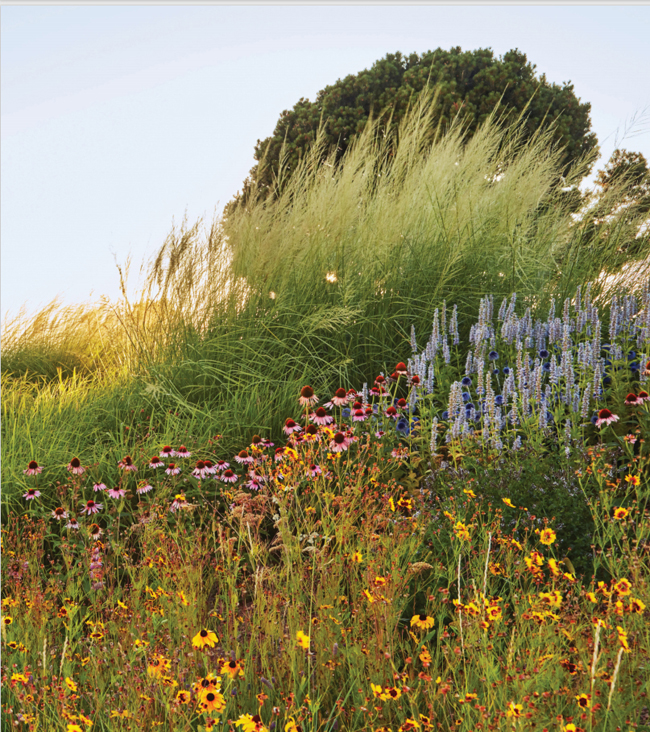 The issue closes with a feature on a beautiful, windswept garden in Santa Fe, New Mexico, sown by an ambitious couple who wanted a full-fledged garden for the first time. The results are stunning, with undulating grasses and wildflowers on a rugged ridge of land overlooking the mountains.
Martha Stewart Living always takes its readers on a journey and I think that's what I most enjoy about it, aside from all the specifics of design and content. It is that feeling that you're being shown something interesting, taken somewhere intriguing or encouraged to try something different. The March issue is yet another gateway to one such journey.
MARCH ISSUE HIGHLIGHTS:
Favourite Good Thing: Cheater's mac-and-cheese
Favourite Recipe: Turkey Meatballs in Apricot Sauce with Mint and Almonds
Favourite Find: Mercury Mosaics
Favourite Feature: "Change is Good" by Elyse Moody and Pieter Estersohn
Posted by ANDREW RITCHIE at 12:25 PM

I toasted a slice of sourdough bread well let me rephrase that I wanted to toast a slice of sourdough bread in my yard sale find of a chrome toaster today but this toaster burned it to a char and set the smoke alarm off. the seller warned us it burns toast--
some thing must be bent as it doesnt always pop the bread slice up in time. I had to open all the windows and set the ceiling fan on high speed. burnt sourdough toast is not a good thing

OMG thanks for posting. Today I reread this blog and wow do you remember where you were when MS announced the introduction of her Bedford estate I think it was a show about pearls and some woman who sang the praises of granny smith apple green as a color call me c r a z y but that is what I remember ps don't we all miss alexis stewart and her blog well yes yes sorts may her hobart see better days

I just stumbled across this blog. Recently I just started collecting the martha by mail items. Very hard to find I'm in my early 30s and buying a house so this is all very exciting !! I just wish I was alittle older when all this stuff was coming out back then ! Thanks !!!

Anon March 24 -- unsolicited advice-- start going to tag sales, thrift stores you may find items ---- I was at an estate sale and the beehive cake mold held by the customer in front of me priced at 12 bucks they did a good job of "not knowing what they were purchasing" I should have mentioned how difficult it would be for the cake to be expelled from the mold hehe and maybe they would have reconsidered and after they left I would have scooped it up HAR har Har Yes Virginia there are things to be found in the after Life those that Marie Kondo but you have to be diligent.